What Mohammed the boat captain thinks 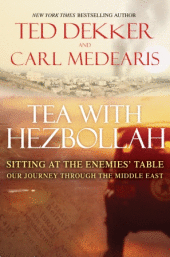 I love going to the gym in the mornings. It gives me a chance to watch the news. It also gives me a chance to compare the differences between the major networks and how they cover the events of the day. Last Friday as I was working out on the treadmill, I caught a glimpse of CNN's analysis of what's happening in Egypt. The CNN storyline emphasized the precarious situation that President Obama faces, and the difficulty of navigating through the thorny issue of demonstrating loyalty to a key ally on the one hand and protecting the image of the U.S. as a promoter of democracy and human rights on the other hand. Fox News--predictably--portrayed the protests as a Muslim Brotherhood-led coup, as if there's no possible alternative between a U.S. backed secular human rights abuser and Shariah. The pundits can say what they want, but the reality is it's not their opinions that matter, it's the opinion of the Arab street that matters. Which is why I recommend my good friend Carl Medearis's book Tea with Hezbollah.

A few years back, Carl Medearis and Ted Dekker took a journey to the Middle East for the sole purpose of interviewing people whom the average American views as "the enemy", people like the Grand Mufti of Jerusalem, the Bin Laden family, and leaders in Hamas and Hezbollah. Along the way, they also captured the opinions of ordinary Arab Muslims. While they were in Egypt, a man named Mohammed took them on a tour of the Nile. The following is a brief excerpt of an interview between Ted Dekker and Mohammed the boat captain.

Ted: What are the most important issues facing you and the world today?

Mohammed: Number one, to find work. Number two, to be able to eat. Number three, to build a house. Number four, to get married. Number five, to live in peace. I was in the '73 war, but war ruins everything. I just want to find a wife and live in peace.

Ted: What do most of your friends think about America?

Mohammed: America is controlling the world. They treat no one fairly, and if I told you anything else, I would be lying.

I saw on the news this morning that the tear gas canisters fired on the Egyptian protestors say "Made in the U.S.A." I wonder what Mohammed and his friends are thinking now?
Posted by Aaron D. Taylor at 8:48 AM 5 comments:

The other Martin Luther King

I think everyone should be entitled to at least one dumb moment per week. Mine was today. I forgot it was Martin Luther King day. I went to the post office to mail out some books. When I got to the foyer I saw that the lobby was closed. I thought, "Why would they take a break in the middle of the day without posting a sign? How rude!" A guy walked in and dropped some mail in the drop box. I asked the man, "Do you have any idea why the lobby is closed?" Just as he started to say, "Yeah, I do" I remembered.....Duh!!

For penance, I thought I'd post a reflection from Martin Luther King's book Strength to Love. Everyone seems to know and agree with Dr. King's famous words, "I have a dream that one day my four children will be judged not by the color of their skin but by the content of their character." This is the Martin Luther King that everyone knows and loves, including talk radio pundits like Hannity, Beck, and Limbaugh. Nowadays, it would be cultural/political suicide to dare to challenge King on these words, and rightly so. But how many people pay due attention to the "other" Martin Luther King?

The one that said these words:

“The universalism at the center of the Declaration of Independence have been shamefully negated by America’s appalling tendency to substitute ‘some’ for ‘all.’ Numerous people in the North and South still believe that the affirmation, ‘All men are created equal’ means ‘All white men are created equal.’ Our unswerving devotion to monopolistic capitalism makes us more concerned about the economic security of the captains of industry than for the laboring men whose sweat and skills keep industry functioning.

What are the devastating consequences of this narrow group-centered attitude? It means that one does not really mind what happens to the people outside his group. If an American is concerned only about his nation, he will not be concerned about the peoples of Asia, Africa, and South America. Is this not why nations engage in the madness of war without the slightest sense of penitence? Is this not why the murder of a citizen of your own nation is a crime, but the murder of the citizens of another nation in war is an act of heroic virtue? If manufacturers are concerned only in their personal interests, they will pass by on the other side while thousands of working people are stripped of their jobs and left displaced on some Jericho road as a result of automation, and they will judge every move toward a better distribution of wealth and a better life for the working man to be socialistic. If a white man is concerned only about his race, he will casually pass by the negro who has been robbed of his personhood, stripped of his sense of dignity, and left dying on some wayside road”

If anybody, I mean anybody, would say something similar to this today, I wonder what Glenn Beck would call him?
Posted by Aaron D. Taylor at 7:41 PM No comments:

It's been a crazy week. The snow that was on the ground when we got back home on January 2nd is still on the ground. It hasn't gotten above freezing. My wife and I arrived back in Farmington at 12:30 a.m. January 2nd. The drive from Cuba (Cuba, New Mexico that is )to Farmington was treacherous! At one point, our car said it was -24 degrees outside! The first thing I noticed when we got home was that we didn't have running water. That's because some pipes were frozen. A little insulation did the trick. We also had some broken pipes that were attached to our washer and to top it off, my battery was dead in the Honda.

In addition to home and car repairs, we had two different doctor's checkups, one for Isaac and one for Christian. They both got immunizations, but it was Christian that was sick the next day.

I haven't told very many people this yet, but I'm working on another book. This one, however, I'm actually getting paid to write. No more spending months of my life to write a book hoping that it will get published. I've teamed up with another author that has the best agent in the Christian publishing industry working for him. I'm the junior partner in the arrangement, but hey, it's a giant foot in the door! Anyways, I had gobs of revisions to do last week to the chapters and the proposal, but I think I did an okay job. I sent it out last night. Hoping the proposal will land a nice advance!

Tomorrow I'm off to Phoenix for a summit with Peace Catalyst. Peace Catalyst is a ministry founded by Rick Love, a former missionary to Indonesia and the former President of Frontiers. The goal of Peace Catalyst, among many things, is to build bridges of peace to the Muslim world. I feel honored that I was invited to participate in a strategy summit on how to build bridges of peace to the Muslim world without sacrificing the essentials of the Great Commission. Some of the attendees head up some pretty significant ministries. Others are major movers and shakers in their cities in the realm of building bridges between evangelical pastors and Muslim Imams. Since there's virtually no Muslims in Farmington, I can't really relate. And about the extent of my practicing peacemaking and non-violence these days is making the daily decision not to beat my kids. Sometimes I think that being an author affords me a status I don't really deserve. I don't feel like I'm "in the trenches" as much as the other participants. Then again, we all go through different seasons in life.

I'm taking Isaac with me.

It should be fun.

Pray for a safe journey on the road, and that God will accomplish through us what He wants to accomplish.

Be blessed!
Posted by Aaron D. Taylor at 8:53 PM No comments: