Pastor Tim O Brien received a lot of flack when his son Levi O Brien supposedly prayed "to" a cardboard cut-out of President George W. Bush in the film Jesus Camp. Many viewers, including some uniformed people in the media, thought the children at Becky Fisher's camp were worshiping the president, when what they were actually doing was praying for him according to the Scriptural command to "pray for kings and all who are in authority" (I Timothy 2:2).

I've known Tim O Brien, and to a lesser extent his son Levi, since before the release of Jesus Camp. Since then, Pastor Tim and I have had a lot of talks on the role of the Church in society and, although we disagree significantly on many issues, I can say that the portrayal of Tim O Brien and his family as right-wing fundamentalists is off base. The real Tim O Brien, though politically conservative, in no way sees voting Republican as a litmus test for faith. His wife does not consider herself a Republican. And—surprise—his children watch Harry Potter! I've spoken at his church on several occasions, both before and after the release of the film, and each and every time I've found the O Brien family and the church he pastors intelligent and open to new ideas.

Pastor Tim sent me this video this morning of a prayer meeting at his church. I found it inspiring. I hope this breaks some stereotypes.

This e-mail was sent to me by a friend of mine. I think you'll enjoy it.


Towards the end of the morning of our third day of STS training in Ollanta, in the Peruvian Amazon, with some 37 pastors, evangelists and leaders gathered for the training from up to 5 days canoe journey away, we heard a loud cry go up from three houses down. "Rene has fallen, Rene has fallen!" Within moments the room was empty and I was left wondering what we were going to do about a guy who had fallen through a floor onto disgusting, sewage-covered ground more than 6 feet below. We were 30 hours boat ride from the nearest hospital and there was no airstrip nor radio to call in help quicker. Rene had fallen hard and his ankles were in such a mess he could not bear his own weight and he had felt the top part of his spine shudder and felt intense pain in his neck. He could neither walk, nor sit nor lie down. As I made my way slowly over to the gathered group noisily praying round Rene, I felt the Lord said to me, "Tell the Eutychus story!" This is the story in Acts 20 of the man who fell 3 stories to his death when Paul was preaching one night. My middle daughter 'had' that story (of the 16 stories we as a family had prepared for this outreach), and so I asked her to tell it in Spanish, which she did immediately. After a good telling I asked a couple of questions referring to parts of the story as I did so. We saw that Paul was focused and un-fussed by the disruption and distraction of the young man Eutychus falling out a window and, that although, the man's life "was in him" he did not come in among the rest until hours later when Paul had spent the rest of the night talking with the disciples and then departed! I asked everyone to pray, hooking our faith in the story (His Word) and we went off to lunch, leaving Rene in the capable hands of two or three friends. Two hours after praying for him and when we were back in the workshop training, Rene walked in unaided and alone, with a big smile on his face, and was received back with loud shouts and whoops of praise as all the STS students saw the hand of God had been at work. It was easy to discuss later the next day the ways we can use stories in our lives - even in the most traumatic of life's situations!
Posted by Aaron D. Taylor at 3:42 AM 1 comment:

The ACLJ and Israeli war crimes, who's imagining what? 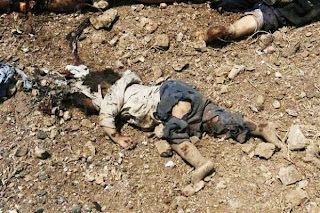 A few days ago I received a mass e-mail from the ACLJ. For those that don’t get their daily dose of Christian talk radio, ACLJ stands for the American Center for Law and Justice. Think of the ACLJ as the conservative Yin to the liberal ACLU Yang. Most of their mass e-mails have to do with issues like opposing abortion and gay marriage. For the most part, their policy positions are reasonable within the context of a healthy debate. I think the ACLJ is at its best when it addresses freedom of speech issues for Christians in America and around the world (For the record. I strongly support their opposition to certain resolutions that would give Islam a special status for protection against defamation).

Having said that, the last e-mail they sent me was particularly disturbing. With a subject line meant to imbue a sense of panic, “Our sovereignty must not be forfeited”, the e-mail went on to describe just how exactly the U.S. and Israel are being subject to the “whims of radicals around the world.” According to the ACLJ:

“The latest example is an outrageous attack by the Palestinian Authority - not even an actual nation - calling for Israeli soldiers (some who hold dual U.S. citizenship) to be convicted of ''war crimes'' simply for fulfilling their duty, defending their countrymen against attacks by the Hamas terrorists!”

According to the official Report of the United Nations Fact Finding Mission on the Gaza Conflict, also known as the Goldstone Report, here are some of the imaginary war crimes committed by Israeli soldiers while fulfilling their duty during the war in Gaza last December:

1. Deliberate attacks against police stations and hospitals
2. The use of white phosphorous munitions
3. At least 11 eleven incidents in which Israeli forces launched direct attacks
against civilians with lethal outcome
4. Attacks on the foundations of civilian life in Gaza: destruction of industrial
infrastructure, food productions, water installations, sewage treatment and housing


The Goldstone report is 575 pages long and meticulous in its detail. Contrary to popular belief, the report also condemns Hamas for its role in the conflict--as it should. It should also be noted that Mr. Goldstone is neither an Islamic radical nor is he a crazy anti-Semitic conspiracy theorist; he's a South African Jew that supports Israel and its right to exist. Even so, Mr. Goldstone nevertheless reports:

“From the facts ascertained in all the above cases, the Mission finds that the conduct of the Israeli armed forces constitute grave breaches of the Fourth Geneva Convention in respect of willful killings and willfully causing great suffering to protected persons and as such give rise to individual criminal responsibility. It also finds that the direct targeting and arbitrary killing of Palestinian civilians is a violation of the right to life.”

That the ACLJ would relegate such well- documented human rights abuses to the status of imaginary –even elevating them to the status of duty—is disturbing on many levels. What the ACLJ is effectively saying in this e-mail, howbeit ever so subtly, is that Christians should support the actions of Israeli soldiers and—wait for it—actively lobby their legislators to grant them impunity even if there is evidence found against them.

The irony here is that while the ACLJ markets itself as defenders of Biblical morality, the intentional destruction of civilian infrastructure is a clear violation of the very Scriptures they say they are defending—even when committed by the nation of Israel (See Deuteronomy 20:19). They also conveniently forget that the Old Testament prophets were constantly condemning the children of Israel for their violence and oppression against strangers living in their land.

How ironic that the very prophets they quote to justify any and every act of violence committed by Israeli soldiers were the ones that spoke the loudest in their day against God’s people trusting in their military might. Then again, maybe this shouldn’t come as much of a surprise. When poor theology and blind nationalism win, Biblical morality loses.
Posted by Aaron D. Taylor at 1:55 PM No comments:

I thought that my book Alone with a Jihadist: A Biblical Response to Holy War was going to be released on October 15th. I got a call from my publisher last night and, it turns out, the release is today! The book is now available on Amazon, and also look for it at your local bookstore!
Posted by Aaron D. Taylor at 11:00 AM No comments: